Be the first to review this product
Special Price $4.99 Regular Price $17.95
Out of stock
SKU
ParaBoard-TP-30A-EC5
Overview
This device is used with a balancing charger to simultaneously charge multiple lithium batteries in parallel. By this method you can significantly save time on the battery charging process. This ParaBoard includes the Thunder Power TP-style balance plugs and EC5 power connectors.
Notify me when this product is in stock
Add to Wish List Add to Compare
Email
Skip to the end of the images gallery 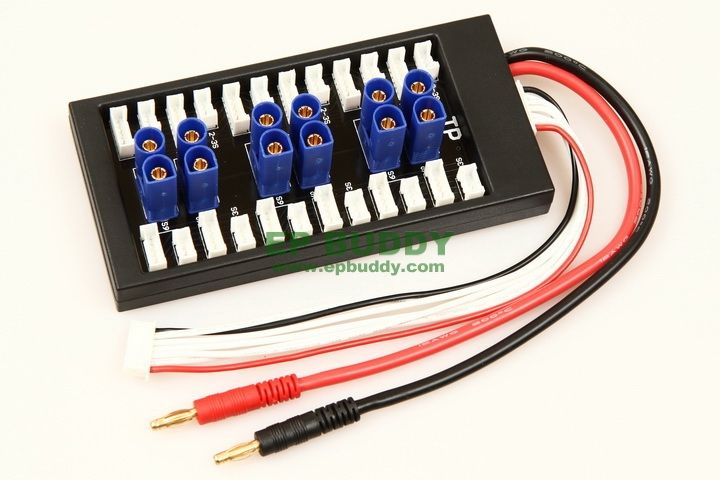 Skip to the beginning of the images gallery
Details

This device is to be used with a balance charger to simultaneously charge multiple lithium batteries in parallel. By this method you can significantly save time on battery charge process.

The principle and practices of parallel charging lithium batteries have been well discussed in the forums on RC Groups. This method has been proved to be a safe and efficient way to charge LiPo batteries, and is being widely accepted by more and more RC hobbiests all over the world.

Each board has six set balance ports, from 2S-6S (except for the HP type that does not have 5S ports), and six T-plugs. Since these ports and connectors are arranged in parallel, a T-plug and a balance port can be randomly matched for battery charge. These ParaBoards can be used for charging up to six batteries at the same time.

ParaBoard is made of selected high quality components. The PCB board is made of two ounce copper and the main power circuit is heavily tinned to allow the use of high current. ParaBoard products have been fully tested under 30 A continuous current, and is safe to be load at 40A for a short time (10 - 30 minutes).

This board can be used for the following brands of LiPo batteries:

More Information
Reviews
Write Your Own Review
Only registered users can write reviews. Please Sign in or create an account